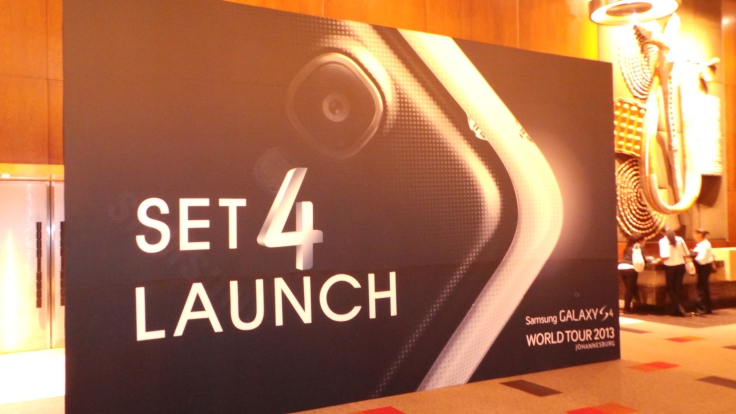 For months now I have been searching online wanting to catch a glimpse of the Galaxy S4 and trawled through pages and pages of speculation. But all came together with the big announcement in New York a few weeks back, I made it my mission to make sure that I was a part of the launch in SA! Last night, after many intriguing invites and secret planning, Samsung launched the S4 at a spectacular event held at the Sandton Convention Centre.

The event was not only one that brought in people from all over Africa to our city of gold but was an absolutely breath-taking experience from when you arrived to when you left. Outside the venue, there were people making foam number four’s that we sent off into the night sky; the décor was in true Samsung-style – sleek and sexy; RFID tags were included in your registration pack that sorted your social check-ins for the night; and they had a flash mob that entertained guests while registrations were still underway. After all that excitement we then filed into the main hall and waited in anticipation to see the new S4. George Ferreira, Vice President and COO of Samsung Electronics South Africa  took us through the evolution of the Galaxy range and introduced us to some of the awesome features this device boasts. After a mind blowing presentation they opened up 4 areas where we were able to interact with the new Galaxy S4. Can I just say – this spectacular phone is everything you imagined and more! Following from the expo area, everyone was treated to canapés and drinks with DJ Fresh and Euphonik getting us all in a party mood to celebrate the arrival of the S4 on African soil!

After all the excitement and awe inspiring moments from the night, the following are only a few of the exciting features that the new Galaxy S4 that I enjoyed when using the phone:

Samsung have really outdone themselves with this addition to the already great Galaxy range but with their focus on you and how you live, the S4 truly lives up to its motto of being a Life Companion. The S4 not only gives you the freedom to capture your meaningful moments, but seeing the pictures come to life on their 5inch Full HD AMOLED screen is something truly amazing.

The S4 is also there to simplify your life with enhanced voice controls and interactive display so that you don’t even have to touch the screen to navigate through the menu. It also makes connecting with people super simple giving you access to your friends through Group Play and giving you the freedom to communicate in not one language but many with S Translator. And just when you think that the S4 does it all from making meaningful memories to keeping you connected, Samsung introduces a feature on the phone that cares for you – S Health – an app designed to look after and track your wellbeing as you move through life.

Now that I have finally met the beautiful S4 and don’t have to stalk it, I have a new mission, that is how am I going to get my hands on this beautiful device.